Day 3 Pfiffner Traverse: The Value of a Flexible Hiking Plan

Last week on the Pfiffner Traverse Series, we examined the continued deterioration of my hiking itinerary for the trip in September 2020. In this installment, I focus on the challenging experiences of a day on the Pfiffner Traverse primary route, as well as my decision-making process in the face of continued adversities. In the end, the value of a flexible hiking plan became evident in staying safe on the excursion.

I felt refreshed on day 3 of the traverse, but also skeptical that I needed to cover over 20 miles that day to make my campsite reservation at Grouseberry campground in RMNP. Upon packing up camp, I dove right into switchbacks to gain Gourd Lake in Indian Peaks Wilderness. The route quickly veered off the trail and passed several lakes to the base of Cooper Pass. Featuring an array of alpine lakes among large granite outcroppings, this section of the Pfiffner Traverse is extremely beautiful. It reminds one of the Sierra Nevada range near Yosemite. 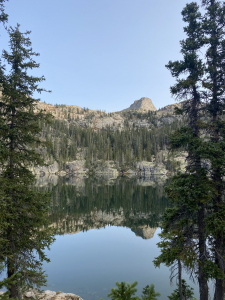 Cooper pass proved to be challenging due to the steepness of the climb – as well as the fact that it traversed directly through a scree field. I had done plenty of off-trail scree hiking in previous years, but scrambling on a steep slope with a backpack requires coordination and fitness beyond anything I had dealt with. Upon gaining the ridge, I peered down into the next valley aptly named “Hell Canyon.” The route required a careful downclimb on a scree and tundra slope that averaged a steepness of 40 degrees. Even without snow, I needed to sidestep and downclimb much of the slope and drive my trekking poles deep into the ground to retain my balance.

By the time I finally reached the bottom of Hell Canyon, it was evident I was not keeping my original plan for mileage on the day. In fact, I was only averaging about 1 mph. My slow pace could not be attributed to tree blowdowns or snow, this is simply how difficult the standard Pfiffner Traverse route is.

The climb out of Hell Canyon up Paradise Pass was less daunting, I gained the ridge and entered the southern boundary of RMNP. I was skeptical about the downclimb due to the fact that it is located on a north-facing slope, but my microspikes worked well in helping me through the snowy terrain. This section of RMNP is known as Paradise Park. It is a scientific research area in the park that doesn’t have trails or campgrounds. As such, the wildness of the place is visceral. 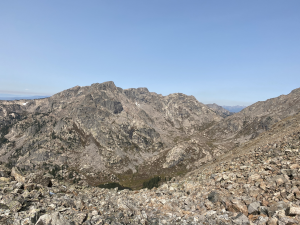 Leaving Paradise Park, the Pfiffner Traverse follows streams to contour its way up Isolation Peak Pass – which then drops down to Fifth Lake. Throughout the wooded climb up the pass, I again dealt with extensive tree blowdowns on an already difficult hike. Moreover, I kept with my 1 mph average moving speed for the day – this pace is not conducive to covering the 22 miles I needed to reach my campsite. 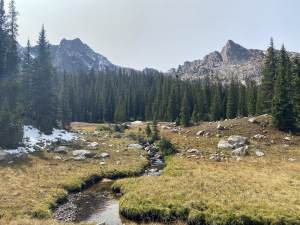 I met another hiker on the summit of Isolation Peak Pass and explained to him how far behind I was on my itinerary. He suggested I find an established campsite along the trail network near Fifth Lake. These trails, although primitive at first, eventually lead to the East Inlet of RMNP in Grand Lake, CO. The reality of my situation could not be denied – I had been hiking for 10 hours and had only covered 10 miles. Finally, I realized that I had to give up my goal of thru-hiking the Pfiffner Traverse. Yet, I didn’t feel disappointed. After days of route finding, climbing, and climbing through blowdowns – the fact that I was still in one piece and having an adventure was enough. Even more, making a smart and safe decision to bail was gratifying in its own way –  like I had reached a new right of passage with wilderness travel. 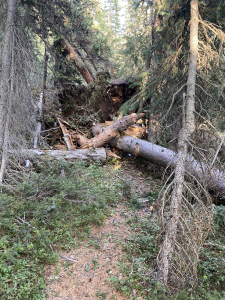 There were a number of factors that contributed to calling my Pfiffner Traverse hike short. In all honesty, the standard route itself demanded everything I had in the way of energy, concentration, and fitness. This is without the added pressures of snow, wildfires, and tree blowdowns. However, making critical assessments of risks throughout the hike allowed me to hyper-focus on the tasks at hand, and truly inhabit the present moment like never before.

Due to my newly adopted hiking mindset, I came to enjoy the unknowns of the trip as much as the stuff I was expecting. This developed into a new view of backcountry travel this is not founded strictly on goals, but rather on flexibility. In all honesty, this dynamic approach to experience more closely resembles the rhythms of nature than does a rigid set of goals.  As I settled into an established campsite on Lake Verna (the place was empty as rangers discouraged hiking with the snow and blowdowns) I realized the value of a flexible hiking plan. Namely, having a looser agenda makes for a more enjoyable experience. Even more importantly, a flexible approach to wilderness travel is far safer than grinding yourself down against an arbitrary set of goals.

On the Pfiffner Traverse Series Next Week

In the next post on the Pfiffner Traverse series, we will look at my experience within Rocky Mountain National Park and Grand Lake, CO.

Learn more about us