The Ambivalence of Mother Nature (Part 5)

The Ambivalence of Mother Nature (Part 5)

In the last installment of the Pfiffner Traverse Series, I discussed my first day hiking on the route. In this post, I will look more in-depth at the challenging conditions of the hike that arose due to the wind storm which ravaged the area. Throughout the day, the ambivalence of mother nature was palpable.

I awoke to a cold, clear morning feeling invigorated after a difficult start to the trip. After the previous day’s escapades, I was looking forward to gaining an established trail over Caribou Pass and Arapahoe Pass. Yet, my hopes were quickly dashed again after gaining Caribou pass and seeing a north-facing stretch of trail entirely socked in by snowfall. The trail is carved out of the rock on each side and is flanked by cliffs – making for a highly exposed and precarious hike. I opted to circumvent the exposed portions of Caribou Pass and Arapahoe Pass and follow a game trail down an east-facing, thawed slope to the north. 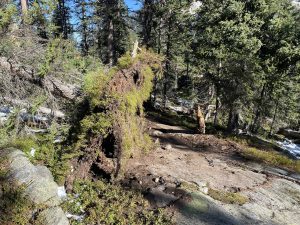 After a semi-technical off-trail descent, I was finally on an established trail. My goal at this point was to regain the miles I lost the day before and get back on track with my pre-planned itinerary. The next off-trail section includes the most difficult part of the hike – a Class 3 scramble known as the “Northeast Gully.” The night before, I had made the decision to circumvent this part of the route due to treacherous conditions with snow and ice. It did not seem like a good idea to down-climb the snow-covered north-facing slope with a heavy pack and no appropriate snow climbing gear. Yet, as I entered Coyote Park in the Indian Peaks Wilderness, I quickly came to realize that this “safe” alternative had plenty of challenges in store.

My chosen alternate route circumvented technical, off-trail hiking for maintained trails that remain relatively flat Arapahoe Pass Trail and Cascade Creek Trail. However, my “easy trail day” was rapidly overturned as I walked into areas of tree blowdowns that superseded anything from the day before. Rather than hiking, my morning had turned into a strange mix of walking, scrambling, and crawling where I climbed through a never-ending maze of tree blowdown. My pace slowed to 0.75 miles per hour. As my legs were bloodied from scrapes and my clothes were torn, I quickly realized how perilous this journey had become. Even more, what I thought would be an easy 16 mile “trail day,” quickly turned into yet another perilous episode.

The sheer power of the Colorado mountains was viscerally evident at this time. As I climbed through the fallen forest, my mind conjured images of what it would be like to camp in such a storm. The fact that you could be killed so quickly in an area of the mountains that generally symbolizes “safe harbor” during a storm shook me to the core. At that precise moment, I needed protection from the snow and ice-filled Class 3 routes that marked the primary route. However, there did not appear to be any safe harbor on the Pfiffner Traverse that day. My mood rapidly swirled through emotions of fear and panic as I worked my way through an inner dialogue of tough decision-making. I didn’t want to turn around – but I was also beginning to realize that my plan may not be attainable. 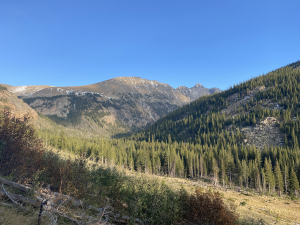 As I hiked, I came to the stark realization that mother nature has no concern for my plans, agendas, and itineraries. In fact, my obsession with making hiking goals seemed frivolous and juvenile in the face of the destructive powers of the Rocky Mountains. The absolute ambivalence of mother nature was laid barren in the fallen forests and icy cliffs of the Indian Peaks Wilderness that day. Against such dark forces, I began to feel an internal shift in my decision-making process, one where safety became a priority above goals.

After an endless afternoon of scrambling through tree blowdowns, I finally found some relief upon making it to Cascade Pass Trail. This area, luckily, did not experience the sort of wind damage seen at Arapahoe Pass Trail and I could again move quickly. As I began to climb again towards Gourd Lake late in the day, I had again regained the Pfiffner Traverse primary route – still in one piece. However, I was still about 5 miles behind my original itinerary – and losing confidence I could regain the miles needed to make my campsites in RMNP for the next two nights.

In the next post of the Pfiffner Traverse series, we will follow my hike as I entered Rocky Mountain National Park.

Learn more about us